Earlier this week, I received my second dose of hookworms. My initial dose, taken 3 months ago, was 35 worms. This dose was 50, basically the upper limit of what is recommended by most providers. It arrived on a Monday, which was unfortunate, as I preferred to take the dose at the end of the week in case of any reactions.

The rash was similar to my first reaction; about an hour of fairly intense itching, then basically like a large mosquito bite for several days. Compared to some of the stories that I’ve read, it really is quite mild. Unfortunately, I woke up during the first night with violent nausea, and ended up being sick. It also seemed to put me into a mini-flare; notching up the fatigue and and aches of the past few days. As I had been feeling quite good in the preceding weeks (possibly due to my increased exercise, or maybe even the worms), the change was noticeable.

That being said, inoculating with the worms triggers an immune response, and can be known to cause existing symptoms to flare. However, now that I’m moving into month four, I’m hopeful that I will begin to notice some serious results. It’s possible that I’m already feeling them. 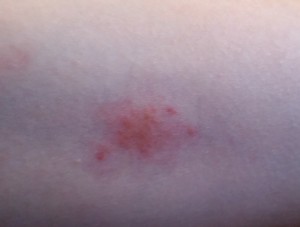